Bill Walton was known for his genius on the basketball court; he stood out with his Hippie hairstyle, vegetarianism and radical politics. Four decades before Ariana Grande’s ponytail was making headlines, this basketball player’s spectacular ponytail was in the news. NBA’s hippie superstar and 1974 first draft pick, 1978 Most Valuable Player, had an unique look on the court. 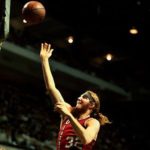 Before moving to Portland’s Nob Hill, the San Diego native was college player of the year playing at U.C.L.A., 1970 -1974 where he led the Bruins to 88 consecutive wins and two national championships. In 1977 Trailblazer Bill Walton was the Grand Marshall of the event “Splash,” a neighborhood fair and parade. The parade went from Couch Park to Wallace Park. His basketball career ended in 1986 after a foot operation. His connection with the Patty Hearst kidnappers, radical activists Jack and Micki Scott, is still being explored. Bill Walton is the most decorated player in the Blazer franchise history.

Barber Ed Delia was 72-years-old when he became nationally known for cutting off Bill Walton’s famous ponytail. (Walton lived a couple of houses off of 23rd on Kearney Street.) Edward E. Delia, owner of Ed’s Barber Shop on NW 23rd near Lovejoy was a native of Chicago, Ill. He cut Bill Walton’s hair just before the Trail Blazer championship game series in 1977.