The images I have come across over the years are like the one above.  I thought it was possible that the center section was saved and moved to NW Northrup.  I only recently found an advertisment below for the hotel and realized that the hotel was a much more massive building than I had previously thought.

John Karlyle had a permit out for a new three-story “flats” structure on July 25, 1906-December 22, 1906 permit for 691 Northrup street. What was exciting was the hand scrawled note on the back of the permit card.” This bldg., is built with material from the American inn if the fair grounds.” More curious perhaps was the note on the other side of the card “This man I had arrested for doing work with out license.” The permit had no name of the plumber just “hired [his] owner.” Pretty exciting that a hundred years ago a city inspector could have a contractor arrested.

The advertisement below right is from the Sunday Oregonian August 26, 1906 for a “high-class Hotel” situated at 689-691-6930695 Northrup Street to be completed next month. The drawing looks far more akin to the American Inn than the reality on the street today. With this drawing in hand in the field you can see where many of the decretive front façade columns and porch features were once attached. The stucco patches are clearly visible and the doors to nowhere on the second and third floors would have once been for access to the former porches.

The permit card was enough to close the case. 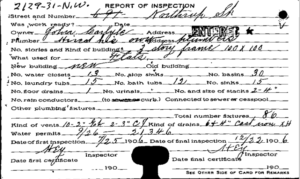 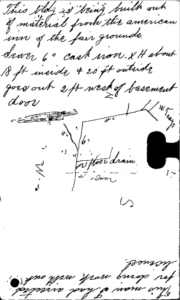