In 1948 many victims of the Vanport Flood were relocated to the Slabtown neighborhood.  Some white families were placed in existing defense housing in Guild’s Lake Courts and charged $48/month in rent.  Other families (disproportionately families of color) were housed in surplus trailers and charged $32/month in rent.  These families were assisted by local organizations like Fruit & Flower and Friendly House to overcome the trauma. The desperation for scrap metal  home front activity we hypothesize was responsible for the failure of the railroad “dike” (berm). 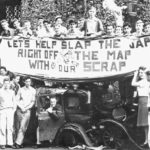 Metal used for tanks, guns, ships required 50% scrap metal.  The desirability of metal is possibly responsible for the weak structure of the berm, 200 section of the berm collapsed. The Vanport Flood  forced 100s of families to relocate to Slabtown. Home Front children were active in efforts to win the war. Lincoln High School was the high school that geographically served the Guild’s Lake Courts Defense Housing project.  Propaganda like this intentional dehumanized the enemy. In researching three similar earthen dam failures each flood could be attributed to the removal of the metal pipes intended to relieve the pressure on the structure. The Johnstown, PA Southern Fork Dam was designed in 1840.  Like the structure in Oregon it bust during heavy May rain fall.  The Johnstown Flood killed 2,208 people the official narrative of the Vanport Flood was that 15 people were killed.  Similarities between the conditions leading up to these two late May floods include excessive melting of snow pack, and excessive rain.

In 1875 Pennsylvania Railroad sold the damaged dam Southern Fork Dam.  The new owners further compromised the dam by removing the cast iron valves and pipes and sold them for scrap.  The dam and surrounding property was flipped again in 1879 for the development of a resort.  This narrative of metal relief systems is not unique it has just been well documented in English because of the overwhelming death toll.

Scrap drives like the purchase of war bonds and war stamps in WWII were competitive.  Papers ran head lines with “Get in the SCRAP …for Victory.  America’s War Plants Must Have Scrap Now! This Job Is YOURS! IT is Urgent!” It is Vital! WE MUST NOT Fail!”  over of $2,000 of prizes were offered the Oregon County able to bring in the most scraps.  School had their own scrap drives.  Scrap “harvesting” was a patriotic effort “if you fail some boy will die”.   Half the metal in ever tank, gun and ship was scrap metal.  If on the home front if everyone’s duty was to lick the shortage of scrap metal and “every pound is a slap at the j*** and a swat at the swastika” it follows that some old metal pipes in an earthen railroad berm (referred to more often as a dike or dam) would be repurposed for an effort that was encourage as a necessity for victory.