ABOUT YOUR TOUR GUIDE 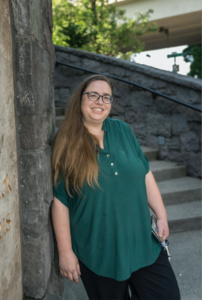 Portlander Tanya Lyn March received her doctoral degree in Urban Studies from Portland State University in 2010, focusing on historic preservation and community development. She has a master's degree in Historic Preservation from Columbia University and is raising two young men one who attends Roosevelt High School, the other son attends Portland State University. She is working on a book about home front experiences of children who lived in the Guild's Lake Courts war housing.  In addition to being a frequent contributor to the NW Examiner and an active blogger she can be found driving the Zamboni at the Lloyd Center Ice Rink. In addition to her dissertation, Tanya has written or been quoted in many articles about Portland history.

THE HISTORY OF SLABTOWN TOURS 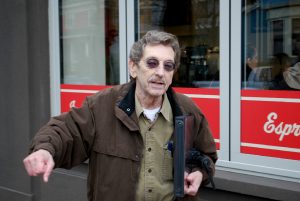 Mike Ryerson was born in Northwest Portland in 1940, a fourth-generation resident of the neighborhood. While his best known claim to public fame may be the famous “Expose Yourself to Art” poster that depicted soon-to-be Mayor Bud Clark doing just that, Mike’s lasting legacy is our deeper understanding of the buildings and the character of Northwest Portland that he championed for decades. In 2012 Tanya Lyn March PhD joined forced to run a two person walking tour company Mike's History Tours. Our guided walking tours emerged as part of our joint effort to help  a meaningful sense of place. Guided walking tours can change the way locals and tourists think and act by presenting them with distinctive place experiences that looks at cultural transformation and historic structures.

Mike was a noted advocate, historian, writer, baseball fan, tavern owner, photographer and a newspaper reporter. Mike was a public character and a local lecturer who freely shared his detailed historical knowledge of this neighborhood usually illustrated by examples from his nearly 100,000 Portland images. Mike compelled old and new residents alike to do more to save the old homes and the historic places of Portland.