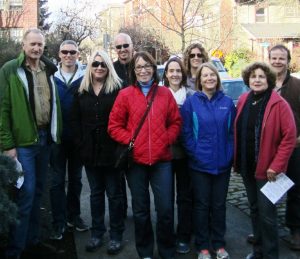 The lawyers and staff from the law firm of Miller & Wagner were recently guests on the Nob Hill – Alphabet District Tour. Their offices are located in the Historic Joseph Sladen House at NW 22nd & NW Flanders Street.

The Nob Hill Tour walks guests beside some of the grand merchant homes of the 1890s and grand apartments built for the post 1905 Lewis and Clark Exhibition building boom. The tour loops back to the starting point along the “Trendy 23rd” Street Shopping district, highlighting the evolution of this early streetcar commercial corridor. Nob Hill was named after the San Francisco area, “Nob Hill” to attract the upper class “nobility” to the area. Experience one of Portland’s trendiest shopping areas, known for its fabulous tax-free shopping along NW 23rd Avenue with your expert guide.

Offered Saturday a Mornings year-round
The tour is 1.2 mies long and the route is fairly flat.

This tour starts outside of  Anna Bannana’s Cafe

Milt Olshen proudly stands behind his soda fountain at the Irving Street Pharmacy in the 1950s.  It was great having his children come on tours in 2015. 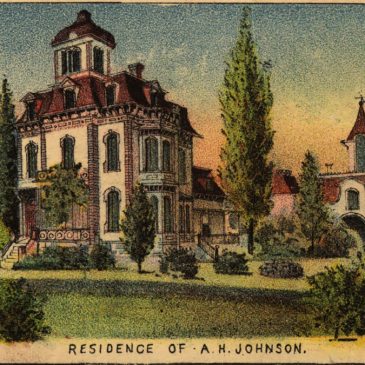 The A.H. Johnson Mansion was located at 193 SW St. Clair in the late 1800s. Johnson’s cattle roamed his ranch in NW Portland-Nob Hill.  All that remains are the Redwoods that his wife Cordelia St. Clair planted for the entrance to their carriage house.  (Thank you goes out to Patrick the great-great-grandson of James Harrison St.Clair for requesting an edit on our website.)