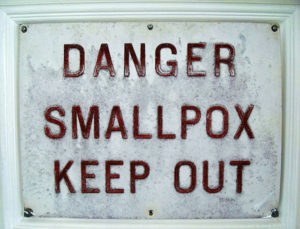 The first official municipal “pest house” opened in Portland in 1862. It was a private home rented to the city for the purpose of quarantining the communicable sick. Not everyone ended up in the pest house—private homes would fly a yellow flag in warning if there were ill residents under quarantine. In September 23, 1873 the Oregon Statesman reported that “the pest house had burned on Wednesday morning”, with no location noted.

In 1873 the city of Portland built a pest house alongside Balch Creek to quarantine smallpox cases and possibly other illnesses such as leprosy.  The city auditor selected the site because a tract of land near the head of “Giles’ Lake” had been offered to the city for that purpose—however the connecting road cost several thousand dollars to construct. (East Portland also had a pest house.) In November 1888 the Albany Daily Democrat accused the Oregonian of underreporting the number of smallpox cases in Portland. A reporter from the Pioneer had enumerated 30 houses flying smallpox flags and had been informed upon his visit to the pest house that there were 20 smallpox patients receiving care.

While tuberculosis was the leading cause of death in the city in 1897, smallpox was a constant threat (in 1889 there had been a smallpox epidemic).  The police chief, James Lappeus, was tasked with bringing infected individuals to the Balch Creek pest house for care and treatment.

The Oregon Daily Journal reported on Sep. 3, 1902 that for $500 dollars Dr. James C. Zan would arrange for the architect and to have the new main pest house building constructed, in order to separate the confirmed cases from symptoms of a suspicious nature. Dr. Zan was the health officer for the city from 1900 to 1905. Fatalities from smallpox were not uncommon and victims were often interred in unmarked graves under what is now Montgomery Park’s parking lot. In 1903 the Oregonian tried to upset readers by reporting that the pest house residents were living large at the city’s expense with the headline “Smallpox Patients are Banqueted like Monarchs”.