New York Yankee great Joe DiMaggio played for the San Francisco Seals of the Pacific Coast League from 1932-1935. He hit tow home runs in a night game against Portland Beavers in the old Vaughn Street Ball Park at NW 24th Avenue that landed on 25th Avenue. The Seals won the game by a score of 7 to 5.

The first NW Portland business to use the Nob Hill name was located at the current site of an internationally known restaurant.

A gentleman from San Francisco named George Snyder opened a Nob Hill grocery store at 19th& West Burnside in 1883. The location is now the site of McDonald’s Restaurant.

HISTORY FUN FACTS #3 Which local girl landed a role in Gone With the Wind? 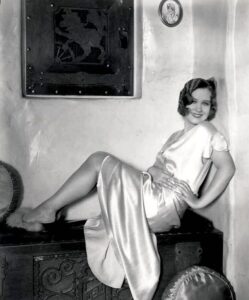 Ona Munson (1903-1955) is best known for her role as a prostitute named Belle Watling in the classic 1939 movie Gone with the Wind. A few years earlier she had been sitting behind a desk at NW 23rd & Irving Street.

Ona Munson, who had changed her name from Owena Wolcott, attended Miss Catlin’s School on NW 23rd. [The school building ran out of a mansion owned by the Hoffman family from 1911-1917, the location of that dwelling is currently Papa Haydn restaurant site .]  Munson was a student for several years at what later became Catlin Gabel School, thanks to the patronage of the wealthy and eccentric Maud Ainsworth.   She enrolled at Lincoln High School as a freshman but did not matriculate; she left Portland in 1917 at the age of fourteen for New York to become a dancer.

When it was announced over the public address system that Ray Charles wouldn’t be performing during his scheduled evening concert at the popular 21st Avenue; West Burnside dance hall, the crowd began to riot. Before the evening had ended, 101 police officers with clubs, and 25 firefighters with hoses had arrived in an attempt to calm nearly 1,000 angry rock ‘n’ roll fans.

For nearly 40 years, a dance hall operated at the current site of Walgreens on West Burnside. In the 1930s and 1940s it drew large crowds attending dances with the big band sounds. At first it was called DeHoney’s Ballroom when it opened in 1926 at one point that switch to the Uptown Ballroom, only to be renamed the Palais Royale Ballroom and the patrons of the 1950s and 1960s were attracted by the new sounds of rock ‘n’ roll. A young Ray Charles and his orchestra were on tour and they were scheduled to play on Saturday, September 3, 1960. Unfortunately for the Portland fans, his private plane was stranded in Seattle due to fog. When it as announced onstage that he wouldn’t be performing, the crowd rushed to the cashier’s cage and demanded their money back. A massive riot erupted and 17 people were arrested.  The video of the riot has often been miss identified as taking place in California.  The video was posted by the Ray Charles video museum. Watching the video it is not surprising that another six were injured, including three police officers, as the crowd spilled onto the NW Portland streets causing damages to storefronts and vehicles for several city blocks.