In this age of rapid development (3-14-16), tour-goers and locals alike are puzzled that this corner storefront—on arguably the hottest tourist drag in Portland—stands neglected.  Why has this building in the heart of a high-rent commercial corridor remained vacant for nearly 25 years?  According an article by Peter Korn in a November 2007 Portland Tribune, the owners are a family operation that is only willing to lease to proprietors who have cash up front to do all the improvement and upkeep.  Nine years later the site still languishes.

Quality Pie once occupied the entire frontage.  Known as “The QP” by regulars, this 1950s-style diner was 23rd Avenue’s late-night hot spot.  Quality Pie was the quintessential place to people-watch, where New Wave/Punks would come after Satyricon shows to eat day-old pies, seated next to Portland’s finest who were filling up on coffee. 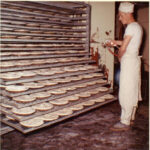 The corner storefront of the building at NW 23rd and Northrup has stood unoccupied since Quality Pie shut its doors in 1992.  Fans of lost Portland’s eccentric nightlife have created a Facebook group with 298 members (https://www.facebook.com/groups/59025722653/).  QP was where people came together from every walk of life in Portland. 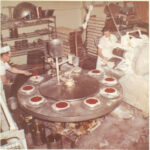 Quality Pie not only was a beloved “coffee spot”, it also baked pies which it delivered to commercial operations citywide.  Paul Baker scanned some wonderful pictures family album pictures from the ’50s and ’60s which include shots of his aunt Hilda Langston, a tall brunette.  These images are amazing documents that are akin to Mr. Rogers Neighborhood’s segments on production assembly lines.  Interior images such as these rarely surface and these early color images give us a window into the creation of the pies.