What was Eric Ladd’s Real Name?

Leslie Carter Hansen attended Ainsworth Elementary School and Lincoln High School.  Eric Ladd was the name he adopted in 1941 when he studied acting presumedly had an acting career in Hollywood until 1943.  He returned to the area to become a shipyard worker in 1943.  He was handsome, debonair, and a connoisseur of elegant old buildings-predating-a formalized system of preservation, he was winging it.

There is a wonderful article in the Northwest Sunday Magazine on March 21, 1971 that details a number of the buildings that Eric attempted to save. Eric Ladd faced rampant demolition of historic structures not unlike the threats historic buildings see today in Portland as we face an increasing demand for multi-unit residential rental houses. Once the demand for parking drove demolitions – currently the demand for housing is driving the wave of demolitions.

In the 1960s Ladd collected a number of historic buildings the way some elite collect antique cars.  The collection of homes, fondly called “the colony” stood on a two acre tract of land at SW 21st and Jefferson. He operated a restaurant out of the Kamm House from 1955 to 1959. The structures were moved there and all but one had been condemned by the City of Portland.  His home will be open to the public for twenty-five dollars on June 21st, 2015.

Eric Ladd was one of the leaders in saving cast iron components of buildings being demolished during the 1960s Urban Renewal Era. He was also instrumental in saving the Pittock Mansion. 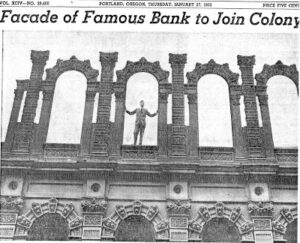