Did a cat once own a building on NW 23rd?

No.  Nina Churchman Larowe did not leave her building to a cat that is an urban myth. She bequeathed the theater building on NW 23rd valued at $25,000 to the Oregon Human Society in 1922. She was childless. Because her husband died young; Larowe was forced to make a living as an actress in New York City before trying her luck on the west coast. She struggled in Portland until the city elite took a fancy to her and sent their children to Larowe’s dance school and hall on NW 23rd and Kearney, in Portland. She purchased the German Savings and Loan Society’s Hall for $6,000 after renting various locations for the dance school. She sold the building[1] but because of default in payments it reverted back to her by 1919. The Oregon Human Society maintained ownership of the building for many years, using the income to help many cats.

Did she leave the former dance hall known as the Esquire Theater to her cat in 1922?

Mrs. Nina Churchman Larowe, was a prominent resident of Portland. She arrived in 1888 trying to support herself in the burgeoning city Portland teaching gymnastics than elocution, she became dramatic critic and society editor of The Oregonian, she was unceremoniously fired. On Northwest 23rd & Kearney she established the first dancing academy of the city, retaining- her pre-eminent position as the city’s first and most popular ballroom dancing Instructress for more than 14 years. Her father was an intimate friend of Abraham Lincoln and she travelled for many months with Mark Twain through Europe and the Holy Land:

I had come to Portland to live, to earn money. I found the city pretty small and pretty primitive In every way. The Esmond and the St. Charles, down on Front street, were the first clubs hotels. The Portland hotel had been begun but only “the foundation walls were built and there it stood like an old ruin. “There were no bridges, just antiquated ferryboats on a string and horse cars.

Pieces From The Cutting Room Floor:

Mrs. Nina Larowe owned a reputable dance studio on NW 23rd. The cultural shift from formal dancing to more free forms of dance led Larowe to convert the building in 1912 to the Nob Hill Theater showing silent film and staging local vaudeville act. The theater was reconfigures over concern over fire safety reopening as the Esquire Theater from 1938-1987. The building was converted to retail spaces in 1987 and most recently restored by owners C.E. John in 2011.

Larowe and other dance schools banned a number if popular dances as dangerous to morals over the years: “Texas Tommy”, “Grizzly Bear”, “Bunny Hug”, “Buzzard Lope” and the “Turkey Trot”. She described this “Turkey Trot” a dance invented in the Barbary Coast of San Francisco in 1909 as lacking grace. While dancing the Turkey Trot, dancers would sway to and fro, going in a straight line around the floor, while occasionally “Pumping or Flapping” of the arms was encouraged, thus giving the name of the Turkey Trot. Mrs. Larowe described “It’s like a turkey on a hot plate constantly lifting its feet so they won’t get burned. When danced in the extreme heads are held close together—too close together I should say.” Dancers across the US were fired from their jobs and some young women served jail time for dancing this trot. Dance halls claimed the moral high ground but the real threat was that these dances were popular and easy to master. Danceable by the average dancer the trot did not require professional lessons to learn. 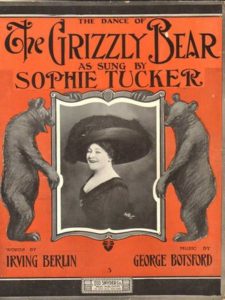 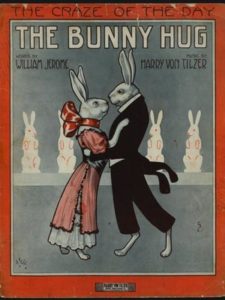