When did the largest recorded meteorite drop by Slabtown? 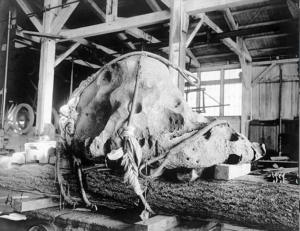 While the Willamette Meteorite now lives in the American Museum of Natural History in New York City, in 1905 it first came to Slabtown to be displayed at the Lewis & Clark Fair. It is believed to be the iron core of a planet that shattered in a stellar collision billions of years ago. The artifact had spiritual meaning for the indigenous people of the area. Sadly, when the Willamette Meteorite was found in 1902 by Ellis Huges (an early settler in West Linn) he started a chain of events that separated “Tomanowos” from the Clackamas people. Mr. Huges found the 15.5-ton meteorite on his neighbor’s land. After failing to purchase the adjoining parcel from the Oregon Iron and Steel Company, he dragged the meteorite ¾ of a mile over to his property, with the assistance of horses and family members—it took him 90 days. The meteorite heist was quickly prosecuted when he was brash enough to charge the public admission to see it. This significant rock had traveled from Canada or Montana some 12,000 years ago in the Missoula Floods. Its short trip to Slabtown, on a specially-built horse-drawn wagon, was barely recorded in the press at the time, owing to the number of 1905 Fair activities. It was sold by Oregon Iron and Steel to a New York socialite who donated it to the Museum in New York.

However, you don’t need to fly to the Big Apple to experience the meteorite. There are two replicas in Oregon—at the United Methodist Church in West Linn and at the University of Oregon in Eugene. A piece of the original meteorite is in the Museum of the Oregon Territory in Oregon City, and another is in the collection of the Oregon Historical Society—Executive Director Kerry Tymchuk loves to show to visitors.

From the plaque in New York: “The Clackamas named the meteorite ‘Tomanowos’. According to the traditions of the Clackamas, Tomanowos is a revered spiritual being that has healed and empowered the people of the valley since the beginning of time. The Clackamas believe that Tomanowos came to the valley as a representative of the Sky People and that a union occurred between the sky, earth, and water when it rested on the ground and collected rainwater in its basins.“