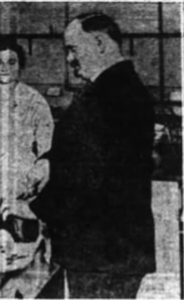 Henry Thiele was hired during WWII to cook for 1,000 of new workers arriving in the Pacific NW. A 3,900-room dream dormitory “Hudson House” awaits you in Vancouver.  “Chef of the huge dining rooms, which can serve 1,200 meals at one time is Henry Thiele, long famous in Portland for his cuisine and in younger days a student of European cookline.”  I stumbled upon David W. Eyre’s 1942 article for the Newspaper Enterprise Association syndication in a half dozen newspapers; knowing that those dormitories were built first and that workers were being promised that housing like Vanport was being constructed and would be ready in 90 days.  The Hudson House Theater was identical to the Vanport Theater—I’ve been trying to find blueprints or as-builts.

Henry Thiele was the chief steward on the Benson Hotel when it opened in 1913. His talents established the standard of excellence. During WWI he had trained matrons at Girl’s Poly to cook for hotels during labor shortages; he also talked about the need to reduce food waste and how to cook on a budget.  Henry Thiele’s Restaurant, 2315 NW Westover Road, opened in 1932.  The stucco building pictured below had table service for 150 diners and had ample free parking for 100 cars.

According to historian Richard Engeman, “Thiele’s social connections conferred celebrity chef status on him from the 1920s until his death in 1952.”  From the 1959 menu: “We are not the glamorous-type restaurant, but solid, family-eating place and over the years have built our reputation on word-of-mouth advertising.” They made their own dill pickles in the basement on the corner of Burnside and NW 23rd and in the early days had their own butcher in the basement.  The restaurant operated until 1990.