Couch Park has amazing trees—40 different species. Our current snowstorm drew my attention back to our local arboretum. According to the Couch Park 2003 Master Plan, “The variety and beauty of the many trees in the park are its most valuable resource.” Tree maven Phyllis Reynolds, an amazing historian, botanist, and author, helped write “The Trees of Couch Park”. But the history represented on the map left out an interesting reason for the park’s tree diversity. 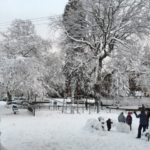 The variety of trees is not just the results of planting efforts by Portland’s elite. The exotic trees were planted as part of the marketing of the North Pacific Sanatorium (1901–10), an adaptive reuse effort that repurposed the Levi White residence. The facility was rebranded as the Portland Convalescent Home (1911–12).  As the wealthy recovered in this post-hospital care facility with top doctors, the grounds were planted with amazing trees from around the world. The sanatorium (a sanitarium is a health resort) operated on two full city blocks. 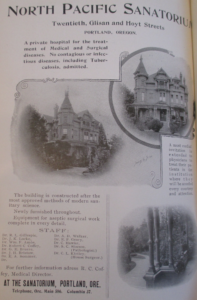 Sanatoriums advertised themselves in the Polk Directories (the old-fashioned version of the white and yellow pages); this one’s advertisement read: “Grounds covering nearly two blocks, beautifully adorned by more than a hundred varieties of ornamental trees and shrubs, gathered at great expense from every continent of the globe. Rugged and picturesque scenery with four eternally snow-capped mountains (Mts. Hood-Adams-Rainer and St. Helens), with the beautiful Willamette River and the busy harbor of Portland to claim attention and cheer the view presented from the Sanitarium, a private hospital owned and controlled by medical men.” Guest also sent out postcards with images of the facility much like one would expect of a hotel rather than an assisted care center.  Interest in more history of Couch Park head over to our blog.